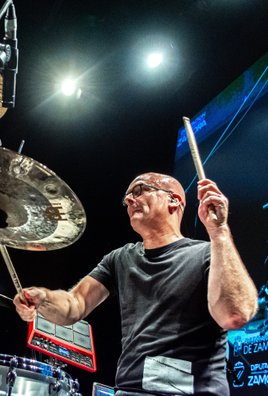 Michael Schack is one of the world’s most well known (E-)drummers. He’s continuously performing solo on music festival stages, in clubs and concert venues. You might also know him from his energetic performances with Netsky (Live). The buzz about his unique, self produced and in demand solo #djdrummer show is going strong: while triggering multi-tempo and entertaining mashup mixes, Michael brings an electronic music performance to a whole different, spectacularly entertaining level with all things drumming 100% live.

As a consultant to Roland’s Digital Percussion development team and contributing V-Drums sound designer, Michael Schack has been very actively involved in the development of Roland’s V-Drums instrument releases since 2004. Apart from being a Roland artist, he’s also been a very loyal international Tama and Meinl artist for many years. As a drumming educator, he’s affiliated to Drumeo.com.